Paris Agreement and Adapting in a Warmer World 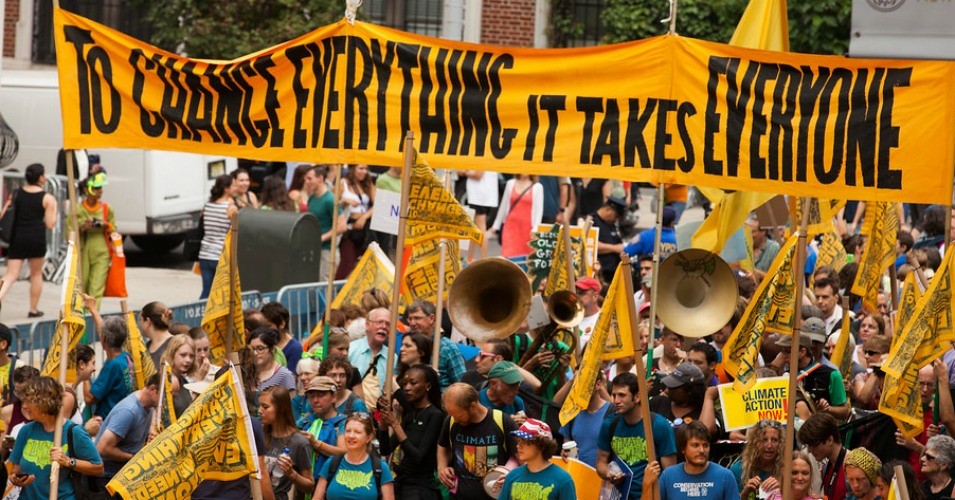 China and the USA ratifying the Paris Agreement, nearly five months after it was opened for signature, has created quite a global buzz.

More recently so, India too has joined this accord and this is indeed huge. So, now we have three of the world’s largest economies and GHG emitters finally agreeing on “Holding the increase in the global average temperature to well below 2 °C above pre-industrial levels and to pursue efforts to limit the temperature increase to 1.5 °C above pre-industrial levels”. This ambitious agreement will certainly have such economies cut off significant amount of carbon emissions, but will be of even more significance to the developing world where people are literally being obliged to change the way they live due to climatic alterations.

With non-significant emissions to contribute to the global atmospheric carbon load, adaptation to the changing climate is deemed as a more feasible means to combat climate change in the developing nations. People adapt to changes in various ways, whether it is installing an air conditioner in homes and offices or farmers planting hardier crop varieties and adopting more resource efficient farming practices.

However, such mechanisms of adapting to changes do not provide a permanent getaway and every one tenth of a degree rise in temperature will demand better adaptation mechanisms, and we may not always be able to keep up. Given the present trend of atmospheric carbon loading and subsequent predicted temperature rise of about 2.5–7 degrees Celsius above pre-industrial levels by the end of the century, vulnerable communities are bound to be tested to the limits for their ability to adapt with the associated changes. There are going to be more erratic rainfalls, heat waves and natural calamities. About half of the world’s species are projected to become extinct and major coastal regions will face threats of overflow and flooding under a scenario world warmer by 2 degrees, and there’s little people can do to deal with sinking islands and drowning homes.

Adapting to changing climatic conditions has economic implications too, and better strategies come at a cost. Approaches to deal with water scarcity in agriculture like drip irrigation or constructing check dams to minimize risks of damage due to increasing occurrence of floods, for instance, will demand more investments than what would have been otherwise. According to a World Bank report, “the cost between 2010 and 2050 of adapting to an approximately 2 degrees Celsius warmer world by 2050 is in the range of $75 billion to $100 billion a year.” What makes this more unfortunate is that it will be the developing countries with already frail economies and vulnerable communities who will have to stand this economic strain. Needless to say, such strains will increase with increasing climatic variabilities which accompany rising temperatures. Communities and social life in these countries continue facing risks of losing their ingenuity making necessary adjustments to cope with changing conditions, and there’s always a limit to how much a community can remodel its social life to externalities before it loses its integrity.

Amidst all this, the Paris Agreement has a key role to play. This aim of limiting global temperature rise to not more than 1.5 degrees is indeed ambitious and may look a bit far-fetched too. However, with a deeper analysis of facts and predictions, we can easily see how this agreement is grounded on reality. Adaptation to climate change is the need of today, there’s no denying that.  But creating conditions that will require us to adjust to fewer unwelcome climatic irregularities is just more crucial. Halting the rise in global temperatures will require major CO2 emitters to act quickly and effectively. The agreement to not let global temperatures soar above 1.5 degrees with helping reduce loading of carbon into the atmosphere, will make things a lot better for the developing countries who are facing the worst of consequences of climate change.

5 years of YPARD: a life-changing journey

"Being a YPARD representative gave me so many empowering opportunities, but also a chance to empower others" Testimonial by Ivana Radic Jean highlighting her experience and journey in working with youth in agriculture within the YPARD Serbia  community  since February 2013.

In 2017, YPARD member, Sebastian Mengel, was the recipient of the Master Thesis award for his collaborative research with YPARD, HAFL and CGIAR CRP drylands program on agricultural livelihoods of rural youth in the drylands of Midelt, Morocco.

Good-bye from YPARD Nepal: Creating a space for young leaders

This testimonial by Dinesh Panday highlights his experience in working with youth in agriculture within the YPARD Nepal  community since 2012. He is currently a doctoral graduate research assistant (2016-2019) at the University of Nebraska-Lincoln and the former YPARD Nepal country representative.

A season of innovation

The climate-smart irrigation system was designed with the aim of addressing these challenges; by collecting rainwater, transferring it below the soil surface and using it during the time of low rainfall thus making water available and accessible for perennial plants all year round.

Sustainable Development Goal (SDG) 13 was created to take urgent action to combat climate change and its impacts to ensure climate resilient agriculture and ICT based business promotional interventions from producer to consumer level. Youth, therefore, can play a supporting role to increase awareness and promote the agenda of SDG for agricultural sustainability to make sure others are aware of it.

From nowhere to somewhere; YPARD made a way

Marc Ghislain tells about all the changing scenes in his life as a young professional in agriculture: the anxiety in choosing a profession in agriculture and how his engagement with YPARD helped him find his feet in the agricultural sector.

I strongly support and believe in an inclusive and equitable quality education together with lifelong learning opportunities for all. It is very important that we start to facilitate more flexible career paths in science if we want to encourage diversity and creativity. Being a lifelong learner is a value of sustainable self-development. It opens the door to life-changing, rewarding, fulfilling and continuous growth.

The role of young people in helping shift gender perceptions is paramount. We can no longer employ tradition and culture as excuses for allowing basic inequalities between genders to occur and to keep perpetuating themselves. We need to acknowledge and cherish culture, but also acknowledge that culture is not a static entity and that it can, and must, evolve towards a more equal society.

Believe in sustainability, food security, fight for the hungry: My Credo

In an era where population, technologies and modernization are fast growing, meeting up with the basic food needs of the population worldwide is one of the greatest challenges nations and international institutions are witnessing. Marc Ghislain shares his views on how the young people can be part of the solution and more importantly in the achievement of the Sustainable Development Goal number two.

Aimé Kazika describes his engagement with other young people to raise awareness so that they become more involved in the agricultural sector within the African and Congolese context.